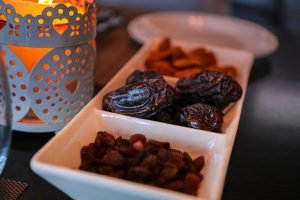 The taste of sweet dates and creamy coconuts, along with the spicy taste of chili peppers, create a unique combination that you have definitely never seen anywhere else. With these three ingredients, you can make a delicious bread that can be served with soup or various juices as part of an Indian feast.

Put flour, yeast, sugar and salt in a bowl and stir until mixed. Then add oil and lukewarm water to them and knead until a soft dough is obtained. Place the dough on a floured surface and knead for another 10 minutes until your dough becomes elastic. Put the dough in a bowl, cover it with cellophane and leave it in a warm place in the kitchen for an hour until it doubles in size.

Meanwhile, go to the ingredients inside the bread. Pour the oil in a frying pan and place it on a medium flame until the oil is hot. Then put the onions in it and fry for 5 minutes until soft. Put the garlic and peppers in the pan and fry for another minute. Next, add the coconuts and stir well until the coconuts are completely coated with the ingredients in the pan.

Remove the pan from the heat, put the dates in it and let them cool. After the dough has risen, press it so that no air remains in it. Then divide it into equal parts and spread it on a floured surface using a rolling pin in the form of small circles. Put a round of the date mixture in the middle of each bread and fold the bread.

Pour the oil in another pan and place it on a medium flame facing the top of the gas until the oil is hot. Fry the buns in oil for 2-3 minutes on each side until they are fully cooked. Cool the buns before serving.